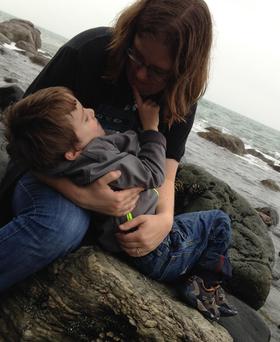 As I look through Sam's early photo albums, I can see where eye-contact stopped. I see where he went from smiling at me, to smiling at something off away from me - from snuggling with me to pushing me away. In his second year I saw him slipping from advanced, to typical, to severely delayed. Those days were tough. He began to scream for hours, and would spend most of his time lining cars up under the table.

We received the diagnosis of autism a few months shy of his third birthday.

We were told by our first occupational therapist that Sam would likely never have typical speech or play. After three sessions with her she told me, hands down, that he'd never progress. After session number five, I was done with her negative attitude. My son wouldn't be labeled as unable to make progress. Instead, I fought for something better.

On January 23, 2014, we started seeing Deborah for occupational therapy. Sam was in diapers, had a minimum of four pacifiers at all times, and was typical for an 18-month-old child. Except Sam had just turned 3 years old.

The first time I met Deborah, I knew our lives were going to change. One of the early conversations I had with Deb, I told her that "I'm not looking to 'fix' my son - he's not broken." Deborah smiled with tears in her eyes. She totally got it. She got it, and we were a good fit, immediately.

The medical goals that our health insurance had set out October of 2013, were "Dress himself, feed himself, brush his teeth." Our first OT said that those were unrealistic goals for us - he wouldn't be able to achieve them.

Honestly, Deborah and I didn't seem to really work directly on those goals much at all. They weren't meaningful to my family. "I'll feed and dress him every day for the rest of my life if he'll look me in the eye and smile at me. I'll brush his teeth and change his diaper until I'm too old to lift him (and in Depends of my own!) if he would just hug me," I would say.

Primarily we worked on the sensory issues preventing human connection for my guy. We worked on what was important to us as a family. Deborah taught me how to be the mom my son needs through her kindness, compassion, encouragement, support, and providing me with specific tools to help my child. Over the next few months, I noticed Sam starting to look at me again. By March, he was off sippy cups. By May, we were off the pacifier. With Deborah's guidance, we were finally able to potty train Sam over one weekend in September!

Deborah helped Sam learn to love, seek, and crave connections. Over time he became my snuggle-buggle again. Now he'd rather snuggle between Mommy and Daddy than sleep in his own bed. He loves to be carried and held. He begs for back scratches.

And you know what happened in the middle of all of that?

He started dressing himself, brushing his teeth, and feeding himself! When we helped him with the sensory issues, the independence came naturally - the human connection came, along with these other skills.

In the first 10 months that Sam was with Deborah, he went from 18 months below age level, to borderline typical. My husband and I now joke that Sammy has "autism lite"! He wants to play with other kids. He talks to anyone who will listen. He has a great sense of humor! He asks for what he needs. He'll always have autism, but with the help of Deborah, he's now comfortable in his own body, and is leading a happy, healthy life - one filled with joy, loving connections, and accomplishments that are meaningful and valuable to him and to us as a family.

This year's photo album looks very different. Deborah didn't 'fix' Sam - he wasn't broken. She addressed the ways in which he engages and functions in the world around him, and he, well, all of my family have found comfort and renewed hope in her care.